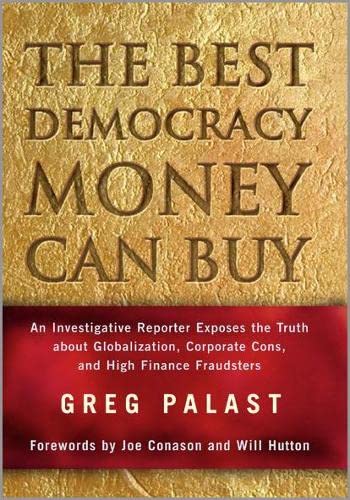 THE BEST DEMOCRACY MONEY CAN BUY: An Investigative Reporter Exposes the Truth about Globalization, Corporate Cons, and High Finance Fraudsters

Muckraking has a long, storied tradition, and Palast is evidently proud to be part of it. In this polemical indictment of globalization and political corruption, Palast (a reporter with the BBC and London's ) updates the muckraking tradition with some 21st-century targets: the IMF, World Bank and WTO, plus oil treaties, energy concerns and corporate evildoers of all creeds. Some of Palast's reports are downright shocking (if familiar). He shows, for example, how the WTO prevents cheap AIDS drugs from reaching victims in Africa and how World Bank loan policies have crippled the economies of Tanzania and other developing countries. On the home front, he details Exxon's horrific safety record before the disaster and reveals the price-gouging by Texas power companies during the California energy crisis. In Britain, Palast exposes the "cash for access" policies of the Blair administration, and blasts the legal system for shielding Pfizer Pharmaceuticals from lawsuits by victims who had defective Pfizer valves installed in their hearts. These are all good, important stories. Most of them, however, have been published before. This book is essentially a collection of Palast's newspaper articles, hastily stitched together with some commentary and exposition. As such, it lacks cohesiveness and the depth his subjects deserve. In addition, Palast's bombastic style and one-sided perspective do much to undermine his own credibility. How seriously should readers take a journalist who labels former U.S. Treasury Secretary Larry Summers an "alien" and dismisses Wal-Mart shareholders as "Wal-Martians"? There is much of value here, but readers who want a full-bodied, serious analysis of how globalization is affecting developing countries or how corporate giants pay for political favors should look elsewhere.