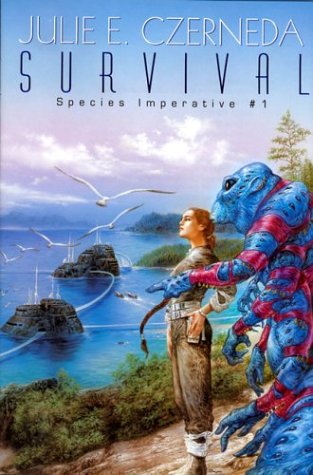 Must one species' evolution ensure another's extinction? Canadian author Czerneda ( ) attempts to answer that loaded question by focusing on the unique but dangerous relationship that biologist Mackenzie "Mac" Connor forges with Brymn, a Dhryn archeologist and the first of his race to visit Earth, in this imaginative, if somewhat slow-moving not-so-distant-future novel set in the Pacific Northwest and the far reaches of space. The story comes alive whenever the workaholic, emotionally withdrawn Mac interacts with the seven-armed Brymn, "a giant bearlike being," who at one point applies makeup to go diving with salmon. Trouble arrives in the form of the alien Ro, who kidnap Dr. Emily Mamani Sarmiento, a colleague of Mac's at Norcoast Salmon Research Facility. Blamed for creating the Chasm, a zone of space littered with worlds that have been sucked dry of all life forms, the Ro also want Brymn and Mac. The Interspecies Union's representative, Nikolai "Nik" Trojanowski, whose mysterious attraction to the straight-laced Mac adds romantic heat to the proceedings, helps the two escape to Haven, the Dhryn homeworld. Unfortunately, Brymn and Mac soon find no place is safe from one species' imperative to survive at any cost. A planned sequel may try to answer the next vital question—can friendship evolve to forgive the ultimate betrayal?