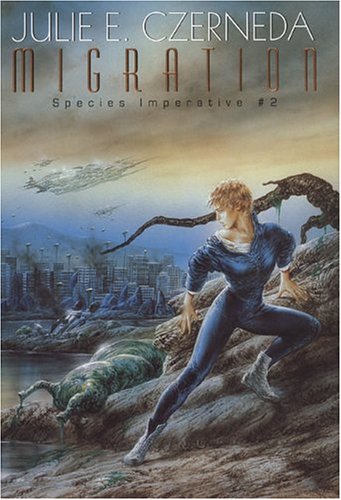 After encountering the alien Dhyrn on earth and later nearly dying on the Dhyrn home world in Czerneda's (2004), biologist Mackenzie "Mac" Connor returns to her job at Norcoast Salmon Research Facility in the Pacific Northwest in this action-filled sequel, which likewise explores the complexities of interspecies culture and understanding with humor and dash. When the Interspecies Union discovers that the formerly peaceful Dhryn have abandoned their world and set off across space, destroying every life form in their path, Mac leads the effort to find a way to stop them. Her Dhryn experience and knowledge of biological drives and animal instinct may provide the key—but her expertise also makes her a target for a hidden enemy, who may have already infiltrated the Interspecies Union. Czerneda's characterizations, both human and alien, are as intricate and entertaining as the twisty plot. Fans of SF adventure and intrigue—and of C.J. Cherryh's masterfully drawn alien cultures, in particular—are in for a treat.