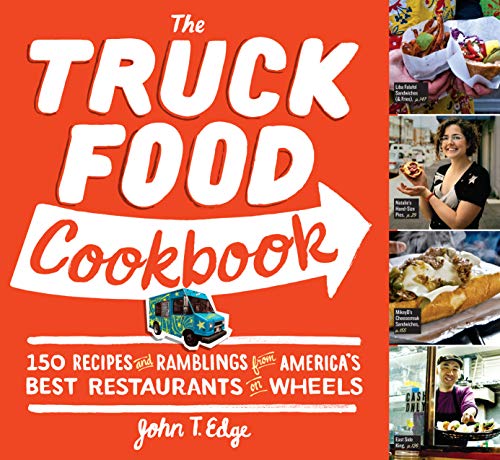 Edge, a roving food writer for the New York Times, has eaten his way across all the top food truck–friendly cities of the U.S., from Seattle and Portland, Ore., to Madison, Wis., and Minneapolis, down to Austin, Tex., and up to Philly and New York City. He presents 150 of his favorite recipes, taken either directly from the vendors when they were willing to divulge their secrets, or else recreated by his colleague, and the book’s photographer, Angie Mosier. It is not surprising that the array of snacks is multicultural in the extreme, but it is interesting to see how certain dishes have jumped the boundaries of their traditional homelands. Jambalaya turns up in Oregon, albeit a healthier than normal version made with red beets and parsnips. Jerk pork in Wisconsin gets the Sloppy Joe treatment, tossed with “store-bought Jamaican barbecue sauce” and served on a bun. And from a Japanese food cart in Philadelphia, canned tuna, mayo, soy sauce, rice, and spice are wrapped in nori and called tuna onigiri. More authentic walk and eat offerings include a traditional Frito pie from Houston, with the chili poured atop a torn open bag of chips, and L.A.-style beef tacos with tortillas dipped in lard before heating. Some of the chefs have spent too much time in their tiny work spaces: how else to explain creations such as the macaroni and cheese sandwich, and the grilled cheese cheeseburger wherein a dainty burger and some lettuce is nestled between two grilled cheese sandwiches? Agent: David Black. (May)
close
Details