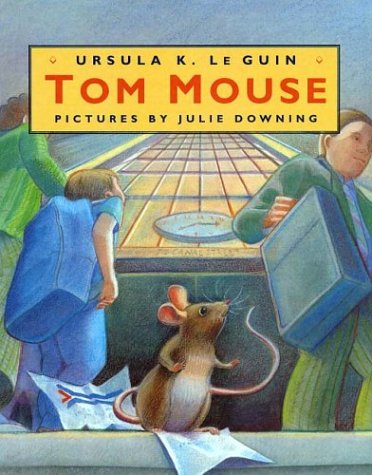 The creators of here take readers on another diverting ride. Tempted by the travel tales of a hobo rat who rides the rails on boxcars, Tom Mouse leaves his home in a hole in the wall of a station diner and sneaks aboard a Chicago-bound train. Though Tom fully expects that any human passenger who spies him will shriek, he has the good fortune to end up in a roomette occupied by Ms. Powers, a kind woman not at all squeamish or averse to sharing her small space—and her snacks of cookies and carrots—with a mouse. Le Guin's smooth, chatty narrative will endear both characters to readers as it relays the cheerful woman's one-sided conversation along with her new pal's unspoken thoughts. And kids will warm to the story's conclusion, which hints at a lasting friendship between the two. Downing's softly focused, appealing art at times recalls the work of Jim LaMarche in its use of imaginative perspectives and close-up images of the friends: the mouse scurries through human feet as he boards the train, gazing out on Ms. Powers's legs through the vents in her closet door, and views the passing world through the cabin's windowpane. Given its relatively lengthy text, this charmer makes a fitting read-aloud for the picture book set or an ideal beginning reader. Ages 4-8.