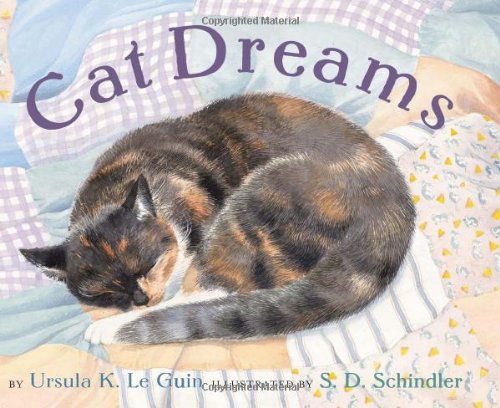 Short, nearly telegraphic verse by Le Guin (who collaborated with Schindler on the Catwings series) conjures up the inner life of a tortoiseshell cat, whose time, when not hunting or planning naps, is devoted to dreaming: “Oh, how nice! It's raining mice!” Schindler offers a series of crisp-edged, meticulous paintings that portray the cat's most extravagant fantasies in penetrating yet serene detail. “Oh, happy day! All the dogs have run away!” says the dreaming cat, towing a kind of wooden Trojan Cat whose roaring face makes the neighborhood canines flee. A fountain of cream with an Italianate cat sculpture in the center attracts a dozen lapping cats and a catnip tree beguiles (“I'm going to stop/ and have a rest/ in a blue jay's nest”), while the text curves up and down on the pages, mimicking both the activity of the cat's imagination and its leaps, bounds and other movements. Le Guin, supplying only the suggestions of cat dreams, leaves the filling out of the magic visions to Schindler, whose splendid spreads compel close inspection. Ages 3–5.