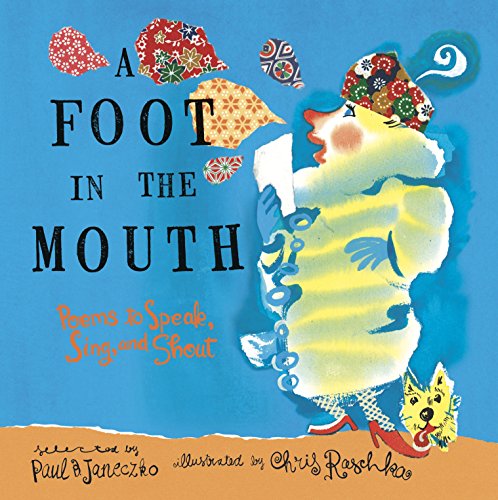 A Foot in the Mouth: Poems to Speak, Sing, and Shout

As the in-your-face title implies, the poems in Janeczko and Raschka’s collection (following their ) are not complacent, although plenty are funny and some are familiar, like the irresistible “Jabberwocky” and the singsong chanting of ’s witches. Punchy collages flutter across airy white pages in loose visual arrangements; torn scraps of origami paper layer with fluid lines in tart color. Janeczko introduces the collection with the idea that “Poetry is sound,” a pleasure to vocalize and memorize. “If you’ve never read a poem to somebody, you don’t know what you’re missing,” he promises, and ebullient choices like Avis Hartley’s “Come, drum! Sound out the day!” reinforce his exhortation. All the pieces have an edge, from Janet S. Wong’s uncomfortable “Speak Up”—whose “American” speaker wants an Asian American to “say something Korean”—to Charles Follen Adams’s “An Orthographic Lament,” reflecting that unusual spellings are enough to make a person “commit Sioux-eye-sighed.” Two poems from bilingual authors appear side-by-side in English/Spanish comparisons. By the time the volume closes with Whitman’s “I Hear America Singing,” readers will be emboldened to join in the “song.” Ages 8–12.