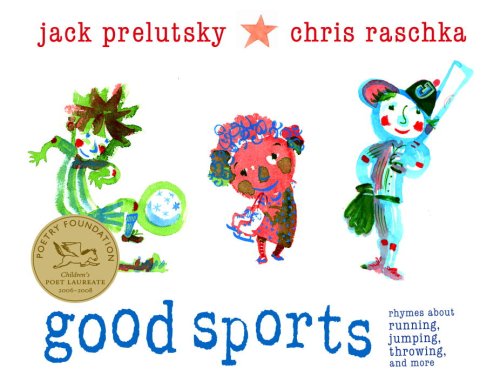 Despite Raschka's ( ) action-filled illustrations, this collection of sports poems lacks pizzazz. The untitled verses brim with fairly obvious sports commentator clichés. A basketball player hopes to "soar above the rim," and a runner "put[s] a burst of speed on." Conversely, one pair of poems humorously contrasts the highs and lows of life on the field: a football player scores a touchdown and says, "I love football. Football's fun," but on the opposite page, Raschka pictures the same player fumbling the ball under a heap of opponents: "I don't like this game,/ Not a bit, not at all." The quick-dash brushstrokes imitate the athletes' movements. A gymnast's elongated leg stretches over her body on the balance beam and emulates the girl moving from one position to another. A baseball heading for a determined hitter trails a streak of color like a comet in the sky. Simulating the stop-animation film seen in television coverage of the Olympics, eight progressive versions of a basketball player depict his eventual delight at dunking the ball. Poems about the same sport are not grouped together but sprinkled throughout the book, and the effect is akin to clicking a TV remote through the sports channels. Although the first-person poems narrated by young athletes may disappoint readers, Raschka's high-speed artwork offers a whirl of color and breathless activity. Ages 8-up