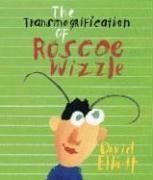 THE TRANSMOGRIFICATION OF ROSCOE WIZZLE

Elliott's () entertaining and energetic middle-grade novel stars fourth-grader Roscoe Wizzle (whose greatest fear is that "a comet will strike the earth when I am in the bathtub"). He leads a fairly ordinary life, despite his quirky parents (Waldo, a cymbal tester, and Wilma, who grew up in an orphanage) and their practice of serving him alternating dinners of mashed potatoes and tuna surprise ("When I was an orphan, I never got any kind of surprise at all," Wilma tells him). But after a Gussy's Restaurant franchise is built atop an empty lot which is rumored to be oddly polluted, strange things start happening. First, Roseville's children begin disappearing. Then, after months of nightly meals at Gussy's (his relieved parents find it a good alternative to cooking), Roscoe finds himself undergoing a Kafka-esque metamorphosis. Could it be his steady diet of Jungle Drums ("just about the biggest hamburgers in the world")? With the help of his brainy best friend, the vegetarian and junior anthropologist Kinshasa Rosa Parks Boomer, Roscoe solves the mystery and helps rescue his kidnapped schoolmates. Colorful plot twists and character names—from Roscoe's teacher, Bernard W. Pinchbeck, to Judy Pongarongatong—combine with sassy first-person narration and snappy dialogue to skew the proceedings a few thoroughly enjoyable degrees off normal. Ages 7-10.