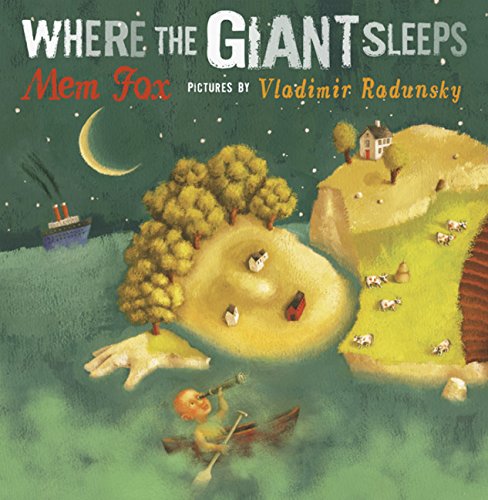 Where the Giant Sleeps

Complex visual clues may send readers for repeat rounds of Fox’s ( ) lilting bedtime rhyme, and even then children will not exhaust the mystery with which Radunsky ( ) cloaks his subjects. “This is where the giant sleeps,” says Fox, not specifying a location, leaving it to Radunsky to create an elaborate, fairytale world of slumbering creatures as dreamed by a sleeping boy. Initially, gouaches portray the giant with his body made up by various items in landscapes: trees serve as the curls in his hair, a hill forms his nose, a red house suggests his mouth, a lighthouse balances on his cliff-like foot, etc. Atop all this, Radunsky overlays map coordinates in a witty foreshadowing of explorations still to come. In subsequent pages a parcel of land that makes up the giant’s body appears in a circle, as if seen through the round spyglass the boy carries. The image on the opposing page is magnified even further, to show both the boy and what he sees—a dragon reclining within the lighthouse (“breathing fire, and snoring”), a sleeping ogre on a boat (he “takes a rest from roaring”), a goblin “safe and warm” in a haystack. The paintings and multifaceted structure of the book inventively translate the puckish text, conjuring misty visions of magical realms. Ages 3-7.