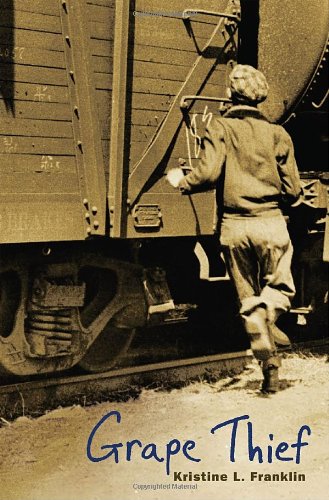 The intelligent, often humorous voice of 12-year-old Cuss, a first-generation Croatian-American nicknamed for his ability to curse in the myriad languages spoken in his small Washington State mining town, propels this historical novel set in 1925. The story begins lightheartedly enough, as Cuss and his friends prankishly attempt to steal from the annual "grape train," which, in spite of Prohibition, brings the local "ethnics" the fruit from which they make wine. But the stakes quickly escalate. His brothers' fatal altercation with his sister's beau (they recognize him as a mobster in hiding) forces them to flee, leaving behind Cuss, his widowed mother and ailing younger brother. The family dynamics and tight-knit community play strongest here. Franklin ( ) convincingly portrays the suffocating lack of options in the dying mining town, making readers understand the generosity of Cuss's mother in allowing her smart son (his gift for languages extends to other subjects) to remain in school through the seventh grade. Cuss's observations and experiences pack a wallop, such as when his best friend brags about pocketing a dime a week of his wages and Cuss plays along, but understands this means "they were worse off than I'd figured." While anxiety for the absent brothers feels real, the story line about the mob and Prohibition seems tacked on. The wish-fulfilling conclusion proves a bit too tidy, but the memorable protagonist and cast offer an intriguing look at the sacrifices and responsibilities of early-20th-century immigrants and their children. Ages 10-13.