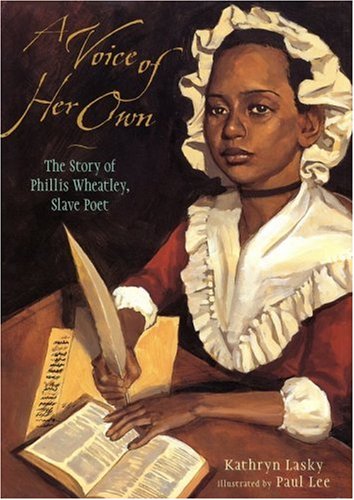 A VOICE OF HER OWN: The Story of Phillis Wheatley, Slave Poet

Lasky () opens her lyrical portrait of Phillis Wheatley, the first published African-American woman poet, in 1761; her subject is about seven years old, huddled in the dark hold of a slave ship. The narrative evokes the child's image of her mother—whom she would never see again—performing her daily ritual to welcome the sun, a memory the girl "would treasure… as if it were the most precious jewel." Lasky offers similarly intimate projections throughout, affording convincing approximations of Wheatley's intelligence and sensitivity. Arriving in Boston, the girl is purchased by Susannah Wheatley, who recognizes Phillis's intelligence and teaches her to read and write, "to prove that it was not only white people who could master languages and the arts." Imagining the girl's thoughts, the author stresses the ironies of the era, such as Phillis's taking her tea alone at a side table after reciting her poems in the parlors of Boston's "finest families." Phillis's poetry expresses sympathy for the American Revolution even as "the colonies in which Phillis lived as a slave were struggling to slip the chains of their own enslavement to England"); no American publisher will print her book, but a British publisher does. Readers hear Wheatley's own voice via a few excerpts of her poetry. Lee's () large-scale, realistic acrylic paintings emphasize Wheatley's strength and constancy amidst the turbulent tenor of her times. Young readers may not appreciate the extent of Wheatley's literary contributions, but her courage and achievement are certain to leave a strong impression. Ages 8-12. ()