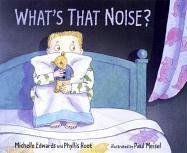 This cheery tale proves that there's safety in numbers, at least in the dead of night. With the lights out, a chilly violet glow falls over the bedroom of Alex and his younger brother, Ben—and suddenly it feels as if the boys are hosting a veritable convention of spooky noises ("") and spectral shadows (a branch outside casts a shape that's a dead ringer for a boy-eating dragon). Ben wants Alex to come over to his bed and sing a silly song to buck up their spirits. But as Edwards () and Root () observe, who knows what kind of "foot-grabbing, toe-biting something that went " might grab Alex as he makes the long, cold trek across the room? Working in watercolor and ink, Meisel () uses every angle of his single, almost monochromatic setting to make the boys' anxieties palpable. He also takes comic advantage of the book's horizontal format, not only exaggerating the space between the beds, but also breaking down Alex's journey to Ben's bed into three separate drawings, so that the trip is simultaneously a nail-biter and a rib-tickler. The final picture, which contrasts the vastness of the dark room with the two boys happily snuggled together in Alex's narrow twin bed, is a comforting tribute to Ben's courage and brotherly ties that bind. Ages 4-7.