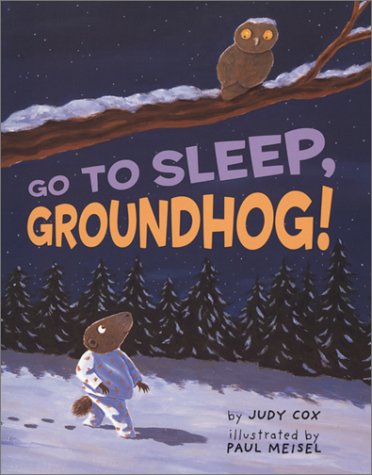 A restless groundhog toys with the idea of timing in this perky look at the February 2 tradition (and also offers a wink at those who like to postpone bedtime). Cox's ( ) critter has trouble following the protocol. Instead of slipping into his usual long slumber, Groundhog feels restless and gets up several times—at "half-past" October, November and December—and observes, for the very first time, all the other holiday celebrations that typically take place while he hibernates. Following each outing, he's coaxed back to bed by well-meaning friends. Kids will enjoy being in on the joke here, as they recognize symbols of Halloween, Thanksgiving and Christmas on the appropriate spreads. Meisel ( ) seems to revel in decorating his crisp acrylics with all the trimmings for the various fetes. Thanks to a simple, repetitive story structure and a cheery design that includes brisk autumn tones and some small panels, trick-or-treaters, turkeys and Santa Claus all seem right at home in the same story. Does this groundhog see his shadow? Only readers know. An author's note provides further details about Groundhog Day. Ages 4-8.