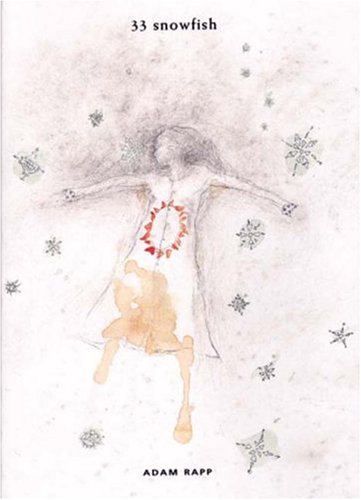 "On top of everything else, Boobie's got the clap," begins Rapp's () dark tale about three runaways who understand hatred and violence better than love. Custis, an orphan, is fleeing from his "owner," a producer of pornography and snuff films. Custis is accompanied by Curl, a child prostitute, and her boyfriend, Boobie, who has just murdered his parents and kidnapped his baby brother to sell on the streets. Drawn together more by desperation than friendship, they roam from one town to the next, stealing and scavenging. Alternating first-person narratives graphically express Custis's and Curl's histories of abuse and exploitation. Boobie remains more of a mystery, revealing troubled thoughts through pictures rather than words (Ering's line illustrations are meant to recreate Boobie's sketches). Signs of hope do not appear until two of the three children have lost their lives and the lone survivor, touched by a stranger's kindness, faces options that could change his fate. Readers may have trouble stomaching the language (e.g., "He was a dirty-ass little half-nigger, too—a lot dirtier than me"), as well as the horrors so flatly depicted and, in the end, so handily overcome. Final artwork not seen by . Ages 15-up.