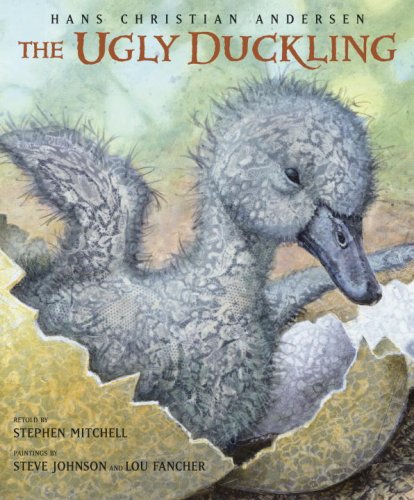 In this faithful retelling, Mitchell embraces Andersen's classic but abridges the melancholy Dane's crueler jabs. As in the original, this opens on a bucolic moat where a patient duck warms her nest “under the burdock leaves” and a stork “chatter[s] in Egyptian” (a puzzling detail to preserve for contemporary readers). After the title ugly duckling emerges, even his mother admits “he's not quite the right shape,” and finally says, “I wish you were far, far away.” Fainthearted readers may pale at the ceaseless hazing and at a scene where two rude geese get shot by hunters (in Andersen, the scene is bloodier). Mitchell omits some nastiness, including suggestions that the duckling is fortunate not to be an ugly . The didacticism, however, remains: when the duckling realizes he is a swan, “the misery he had undergone... made him appreciate all the more his happiness now.... But he was not at all conceited, for a good heart never becomes conceited.” Johnson and Fancher ( ) provide rural, old-fashioned settings, yet undercut the naturalism with collaged details. Rather than having fuzzy down, the swan-to-be appears covered in pasted-together scraps of lead-and-buttermilk-colored lace; the “royal... magnificent” swans resemble porcelain vases filigreed in pretty blue glaze. This layered effect is pretty but not entirely graceful, and the revelatory ending is muted rather than exhilarating. All the same, it leaves Andersen's spirit intact. Ages 4-8.