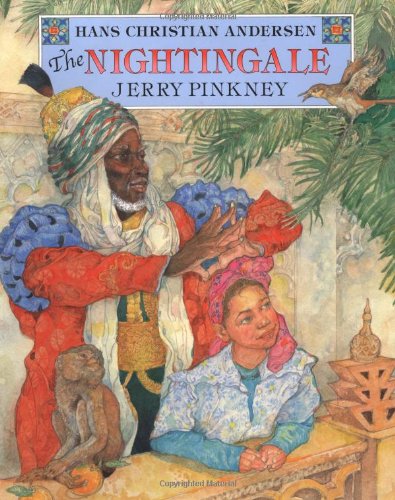 Pinkney () sets this retelling of Andersen's classic tale in Morocco instead of the original China, inspiring a score of lush illustrations and a fresh, piquant narrative. The tale of a king who learns humility from a kitchen girl and a "little, plain, simple" bird unfolds with familiar grace. Pinkney incorporates such atmospheric details as traditional Moroccan fare (mint tea and "pastries made with honey and almond milk") into his smooth prose. He also makes a few concessions to younger readers: when the nightingale's mechanical rival breaks, the emperor eventually turns to "the Great Fixer-of-All-Things" (instead of Andersen's watchmaker), and when the king slips into a decline, he introduces Death as "Old Man Death." He fills his watercolors, rendered in lines as loose and fluid as his characters' beautiful garments, with such exotic touches as palm trees, camels and a pet monkey, and evokes the country's gorgeously ornate architecture and ethnically diverse inhabitants. The sumptuous treatment will easily please Pinkney's many admirers. Ages 5-up.