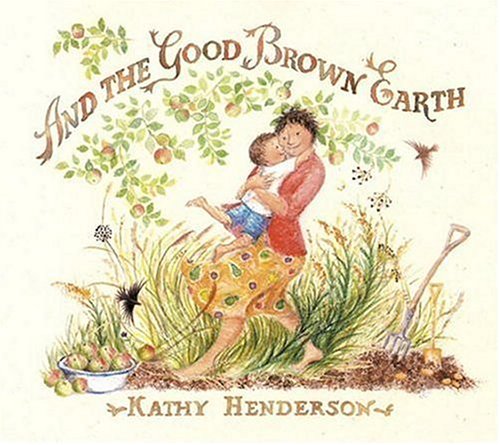 AND THE GOOD BROWN EARTH

During a year's worth of visits to the vegetable patch, Gram, her grandson Joe, and the earth all do what they do best. For Gram, that means knowing when it's the right time to plan, plant and tend a garden ("Now's watching time," she says, putting a scarecrow in the ground to guard against the birds). Young Joe, on the other hand, is an expert at finding the fun in everything—throwing dirt and seeds around in the fall, spraying Gram with the garden hose in summer. And when they complete their season-appropriate tasks, "the good brown earth" takes over, "doing what the good brown earth does best," in the words of the book's rolling refrain. Henderson ( ) puts lilting repetition to effective use in her prose, but at times gets carried away with the descriptions. On one early spring visit to the garden, "the birds were singing, the trees were flowering, and the rain and the sun were chasing each other across the sky"—all of which Henderson expresses more fluidly in her feathery, intricately textured landscapes. Overall, however, this is a beguilingly soft-spoken invitation to savor the magic of the ever-changing garden and the intergenerational bond between Gram and Joe. Gram is fun-loving but secure in her role as grown-up. It's no wonder Joe feels so free in her presence—whether he's lolling in the spring grass or feasting on late summer blackberries. Ages 3-up.