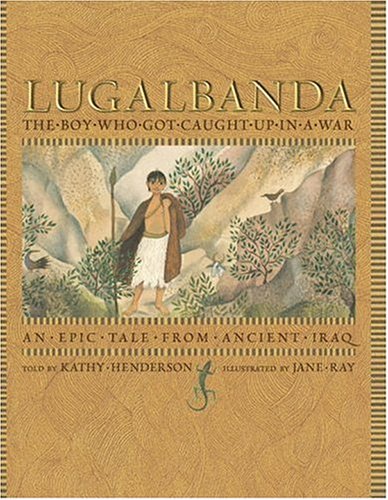 Lugalbanda: The Boy Who Got Caught Up in a War

Henderson ( ) and Ray ( ) here resurrect "one of the oldest stories in the world," and elegantly present it anew for young audiences. The feats of the youthful Lugalbanda (meaning "little prince") originally were recorded in wedge-shaped marks called in a pair of epic poems on clay tablets, more than 4,000 years ago. Set in Ancient Sumer, which we now call Iraq, this tale, with its themes of war and peace, is eerily timely. Lugalbanda follows his seven older brothers, all army commanders, into war to plunder another city's riches. When the boy falls ill along the way, the brothers leave him behind with provisions. After three days, the boy wakes, and his encounter with the legendary Anzu bird, a "monster of the skies," helps save him. The great bird grants Lugalbanda a wish (for "strength in my legs so I never get tired—and arms that can reach out and never feel weak"), which helps his city prevail in war, but in a way that may well surprise readers. Mixed-media full-page and spot illustrations incorporate elaborate details, as seen in the Anzu bird's ornately patterned feathers and subtle color gradations. The somewhat exaggerated proportions in the artwork, and the appearance of the moon and sun in the same sky add a mystical feel to the art, while an airy design breaks up the text-heavy spreads. Henderson's foreword and afterword describe the extraordinary phases of discovery of the text and Sumerian culture, and how she derived this narrative from the cuneiform writings. Wrapped in mystery and myth, this story's message of courage and compassion sounds across the millennia. Ages 8-up.