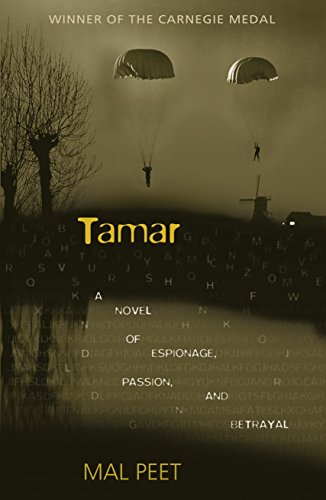 Peet's ( ) novel employs separate narrative threads to track the grief of a teen puzzling out her grandfather's suicide, and the same man's youth in Holland during WWII, where he and another Dutchman worked with the British to repel the Nazi occupation. Both men have code names and fake passports: Tamar's charge is to repair the fractured local resistance movement; Dart runs the wireless, sending and receiving encrypted messages. Fear of capture constantly stalks each, but Tamar is quartered on the site of a previous mission—a farm owned by Marijke, his beautiful lover. Dart is posing as a doctor at a nearby insane asylum, staying alert for late-night transmissions by popping Benzedrine. As winter sets in, so do hunger and desperation. It becomes less clear who the enemy is, as the locals resist Tamar's leadership, and Dart misunderstands Marijke's feelings for him and her relationship with Tamar. Only one man returns to England after the war—and it is his granddaughter, also named Tamar, who receives a box of effects following his death. She then undertakes a journey to understand the box's mysterious contents. Identity confusion is a topic near and dear to teenage hearts, but Peet doesn't introduce the younger Tamar until 100 pages in, and doesn't develop her story nearly as well as her grandfather's. Comparisons to Aidan Chambers's are inevitable—readers who savored it may also take to this complex tale about how war casualties can keep accruing, generations after the battle ends. Ages 14-up.