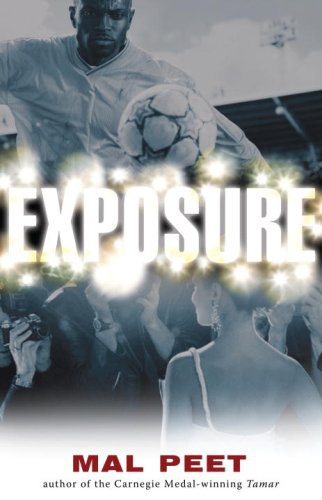 Peet's third novel featuring crusty sports reporter Paul Faustino updates Othello in a fictional South American setting. Superstar soccer player Otello is traded to a new club, a move engineered by his greedy agent, Diego, and a sleazy politician named Brabanta. Within weeks, Otello elopes with Brabanta's only daughter, the pop superstar Desmerelda. Their Posh and Becks–style union becomes premium tabloid fodder, the scrutiny intensified by racist undercurrents—he's black and she's white. Unlike Peet's first two Faustino novels, and , soccer action takes a backseat to story lines about celebrity obsession, the plight of the underclass and political corruption. The story is prefaced with a cast list, the narrative divided into acts, and some passages are presented as if they were dialogue from a play. Teens who don't know Shakespeare's version can enjoy this without understanding the many allusions. It'll be more difficult for those familiar with the original to overlook the fact that the motivation for the Iago character's betrayal of the too-good-to-be-true Otello never quite adds up. Ages 14–up.