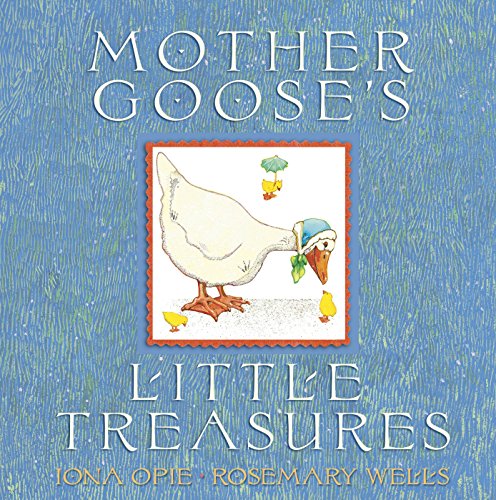 Opie and Wells depart from their previous two collections of well-known Mother Goose rhymes to venture to what Opie describes as “the far edge of Mother Goose’s realm” and there collect “the most mysterious fragments from our shared memory.” As if to signal the difference, the trim size has changed (it is smaller, at 9 × 9) and the paper is matte, not glossy. Despite the large fonts and the continued presence of Wells’s signature bunny characters, however, this is less a title for Everytoddler than one for lovers of rhyme and verse. Wells gives the art a more sophisticated look, trading the bright colors and bustling borders of the previous books for a more subdued palette and adding many more human characters. She riffs on designs of classic Mother Goose editions, playing with fonts and narrow frames, and she outdoes herself in ingenious interpretations. One verse beseeches a “chick chick chick chick chicken” to “lay a little egg for me”; Wells depicts a rustically dressed bunny and a chicken in the same room, each on its own telephone, a speech balloon issuing from the bunny’s receiver shows a brightly painted egg. An especially fine series of pictures features a human mother, daughter and doll, all identically dressed; sometimes only one of the trio appears, introducing jokes about scale, but the funniest include all three, as in the art for a contradictory poem about a mother who tells her “darling daughter” that yes, she can go swimming as long as she doesn’t go near the water (the look on the daughter’s face as she wades into a pond is pure imp; the doll, towed in a toy boat, mirrors the girl’s expression except for its eyes, which roll angelically heavenward). Sadly, the art suffers in the production—low contrasts leave the watercolors looking washed out. Ages 3-up.