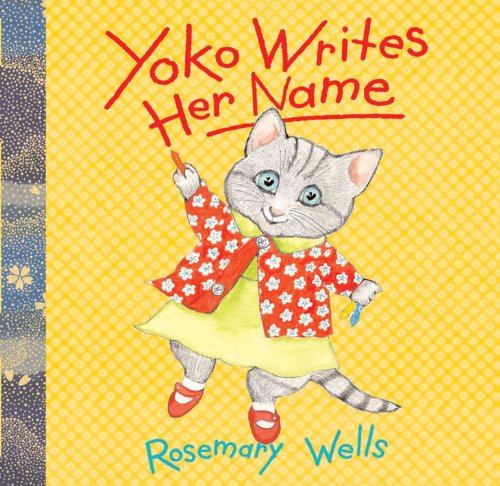 Having overcome the challenges of being the only sushi lover at the Hill Top School (in ), the Japanese kindergartner faces a similar struggle when she is asked to write her name and produces it in beautiful Japanese calligraphy. Although the ever-sympathetic teacher, Mrs. Jenkins, praises Yoko's work, she can't change human nature (never mind that the cast is again rendered as well-dressed kittens, pups and so forth), and soon the class gossipmongers bruit it about that Yoko is “only scribbling” and won't be graduating to first grade. The plot essentially repeats that of : the mother lavishes love on her “little snow flower,” the teacher intervenes with mixed results, and only the overtures of a classmate who wants Yoko to teach him her “secret language” redeem Yoko's spirits. Even so, readers will be glad to see Yoko's return: her character seems to bring out Wells's fascination with pattern as well as color, and her compositions, mostly framed squares set on white ground, are particularly well balanced. English and Japanese captions accompany small insets in the upper corners of the spreads; it would be hard to learn calligraphy from them, but they afford Wells miniature canvases for Japanese-inspired backgrounds, and their scale will delight young readers. Ages 3–6.