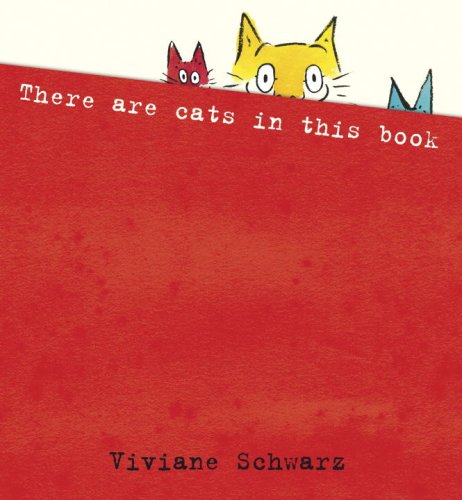 There Are Cats in This Book

Interactive pages colored with ink, paint and photo collage invite readers to revel in what felines already know: that the mere existence of cats is cause for festivity. Schwarz ( ) sets a jokester mood from the get-go, from the partial jacket, which lets cats peep out at readers, to text that begins on endpapers (“The cats aren't on this page”). Flaps, the first of them multi-layered and cat-shaped, and die-cut pages capture the essence of play. The “very friendly” Tiny, Moonpie and André, each a different primary color, entice the audience with dialogue balloons: “Hello. Who are ?... Are you ?... You nice.” The felines plunge with wild abandon into a tableau of sumptuous yarn and later demand release from exotically decorated lift-the-flap boxes. Elsewhere, flaps unveil a pillow fight in progress, as well as a sutured stuffed dog named Biff, and a mishap results in a “tidal wave” of rogue fish, bewildered foils to their cat counterparts. The whirlwind of pure kinetic energy ensures that readers are wholly part of the impenitent kitty world and will be reluctant to say goodbye. Ages 3–up.