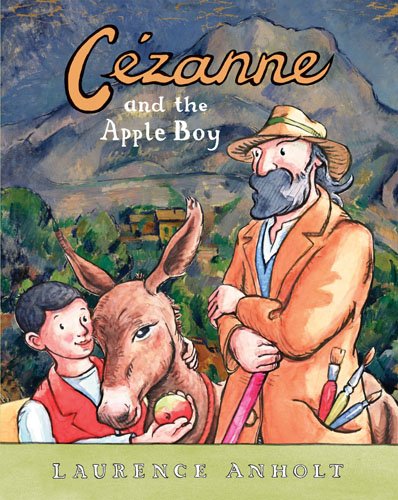 Czanne and the Apple Boy

In this solid addition to Anholt’s Artists series, Paul Cézanne invites his son to visit him in the countryside. Arriving by train, the boy finds his father on a mountainside, “making a wild painting.” He leads his son to the summit, remarking, “It’s a long way, but if we follow the path, we won’t get lost.” When villagers deride the artist’s work, he tells the boy, “The world doesn’t understand me and I don’t understand the world.” But a stranger appreciates Cézanne’s paintings and brings them to Paris, where they sell quickly. Steeped in metaphor (mountain and apple themes recur), Anholt’s dialogue-driven narrative successfully reveals the painter’s eccentricities and his bond with his son. The book’s layered illustrations include reproductions of Cézanne’s paintings incorporated into Anholt’s watercolors, many of which feature the Provence landscapes so prominent in the painter’s work. Anholt gives several nods to Cézanne masterpieces, as when father and son sit on a ledge overlooking the panorama depicted in and two men in a cafe mimic the subjects of . Ages 4–7.