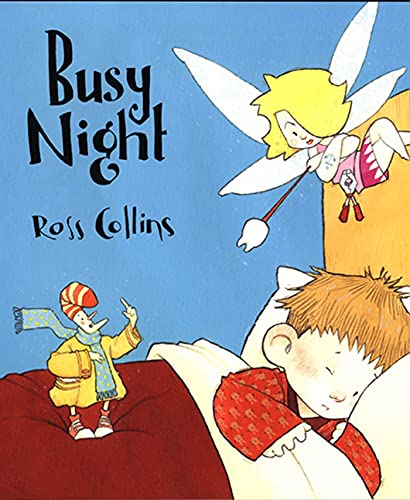 There's a back-up on the bedtime beltway in this humorous fantasy about the various visitors to children's slumberland. When Ben, a lad with a loose tooth, toddles off to sleep, a long line of nighttime guests begins showing up in his bedroom. The sandman arrives first, sprinkling "good, sweet dreams... of peaches and cream." He's followed by a tough-talking tooth fairy (replete with a large pair of pliers and an anchor tattooed on her forearm), who's running behind schedule. Soon the Thing-Under-the-Bed (which claims to look like "whatever gives you the willies"), some wailing ghosts and an off-season Santa Claus ("Blast those elves! Second time I've fallen for that this year") make the scene. Luckily, Ben has the sense to tell them all to "clear off" so he can get some sleep. Collins's () premise is hilarious, even if his tooth fairy sometimes adds too cranky a tone to the mix (and even if she exceeds her customary role by performing tooth extractions here). In addition to having their funny bones tickled, readers will admire Ben's nonchalant bravery in the face of things that go bump in the night. Ages 4-up.