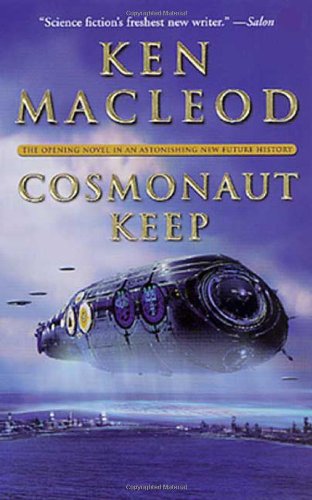 Scottish author MacLeod () crafts an intricate tale, with two thematically linked plots that focus, in different ways, on human travel between the stars and the aliens who help them. Circa 2040 computer guru Matt Cairns flees from Scotland to the United States, then to a space station; he possesses crucial information supplied by aliens that may provide the means for humans to travel the stars. His adventures happen at a critical moment in history: soon after aliens contact a space station, the political situation on Earth rapidly destabilizes. Two hundred years later, biologist Gregor Cairns, a descendant of the cosmonauts who colonized the planet Mingulay, realizes that navigating the stars may be within the grasp of humans, and he sets out to find some of the long-lived crew of the, the original starship to reach the planet. Gregor's investigation of the aliens who pilot interplanetary craft—the friendly but uncommunicative saurs and the huge kraken—eventually leads to a surprising link between past and present. MacLeod handles the strands of the plot deftly, weaving one beautifully realized world with the other and highlighting the parallels between the two. Rarely does a book demand so much of the reader—and then deliver. Densely written with a remarkable depth of cultural texture, though occasionally confusing in its politics (which includes socialists, "Webblies" and libertarian capitalists), MacLeod's story is spoiled only by the false notes of two parallel love interests. The Cassini Division