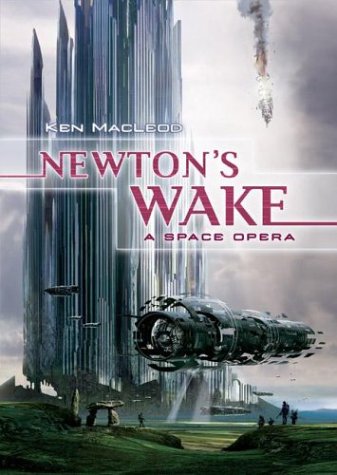 Amid the somewhat strident politics there are some outrageously funny patches in this over-packed space opera from Nebula and Hugo finalist MacLeod ( , etc.). In the 24th century, brash young Lucinda Carlyle takes her first big chance to prove herself to her wheeling-dealing clan who control the skein, a network of "gates" transporting people and equipment instantaneously between planets. In the Hard Rapture war centuries earlier between the United States and united Europe, run-amok American AI took over the brains of humans. Survivors flung into space include the gawkish farmers of America Offline (AO), the straitlaced Oriental Knights of Enlightenment (KE) and the third-world "commies" who strip-mine planets (DK). Lucinda opens a Pandora's box of shifting alliances that turns 20th-century American sensibilities upside down. Keeping the AO, KE and DK straight can be confusing as Lucinda brawls along her barrack-room Glasgow-dialect way. Perhaps MacLeod's most memorably quirky character, Benjamin Ben-Ami, produces epics like , with "a mild-mannered and modest but strong-willed hero" and "gloating psychopathic villains, the Emperor Reno and the Empress Hilary." MacLeod slyly entices Americans to see ourselves as others see us—not a flattering picture at all.