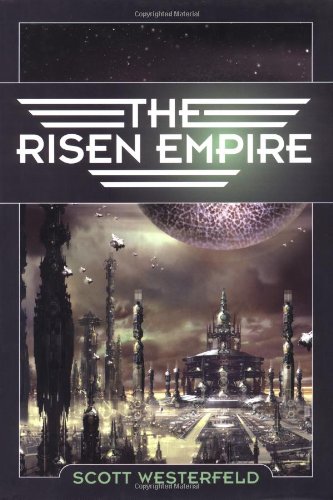 THE RISEN EMPIRE: Book One of Succession

Westerfeld's () exceptionally smart and empathetic novel, the first of two in a series, confirms the buzz that space opera is one of the most exciting branches of current SF. In an interstellar empire of 80 human worlds, ruled by an emperor who lets selected humans cheat death, tensions between most humans and the resurrected elite, aka the Risen, are increasing. The Rix, a cult of cyborgs who worship compound AI minds, hunger to liberate the empire's worlds from mere human control. When a Rix raiding party captures the emperor's sister, Capt. Laurent Zai of the Imperial Navy must save her. Viewpoint rapidly shifts from character to character and from a vast perspective to an extremely small one—that of the intelligence scouts Zai sends ahead of the rescue mission, nano-machines smaller than insects. Keeping the reader constantly off-balance, Westerfeld skillfully integrates extreme technologies with human characters.