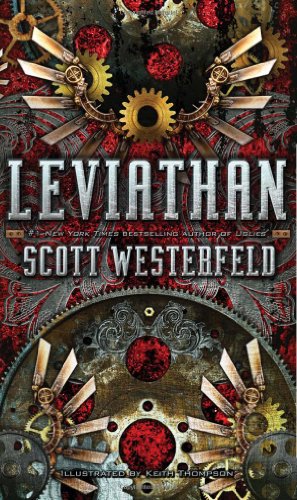 Launching a planned four-book series, Westerfeld (the Uglies series) explores an alternate 1914 divided between Darwinists, who advocate advanced biotechnology, and Clankers, masters of retrofuturistic mechanical engineering. Austria-Hungary's Prince Aleksandar is whisked away into the night by trusted advisers; he soon learns that his parents, Archduke Franz Ferdinand and Countess Sophie, have been murdered and that he has been targeted by prowar Germans. Half a continent away, Deryn Sharp successfully passes as a young man to join the British Air Service; her bravery during a catastrophic first flight aboard a genetically enhanced jellyfish (“The creatures' fishy guts could survive almost any fall, but their human passengers were rarely so lucky”) earns Deryn a post on the living airship . The fortunes of war lead Aleksandar and Deryn to the Swiss Alps, where they must cooperate or face destruction at the hands of the Germans. The protagonists' stories are equally gripping and keep the story moving, and Thompson's detail-rich panels bring Westerfeld's unusual creations to life. The author's fully realized world has an inventive lexicon to match—readers will be eager for the sequels. Ages 12–up.