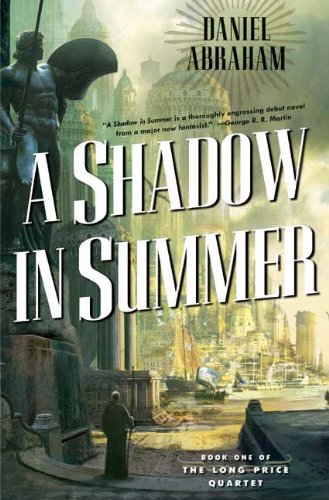 A Shadow in Summer: Book One of the Long Price Quartet

Gesture and posture convey as much information as spoken words in Abraham's impressive first novel, a fantasy set in a world where poets create and bind powerful shape-shifting creatures called "andat." The Empire hangs on, literally, by a thread; the cloth industry depends on the ability of andat Seedless to magically remove seeds from cotton plants to keep commerce flowing and the barbarians in check. Seedless, who can also remove unborn children from their mother's womb, aims to drive his poet-creator, Heshai-kvo, mad with grief. A love triangle develops among a threesome—Heshai's apprentice, Maati; Itani, a laborer with a past; and the beautiful scribe Liat—as they unknowingly assist the andat in his plot to abort a wanted child. When Liat's master, Amat Kyaan, uncovers the plan, Amat must flee and live as a bookkeeper in a brothel. The complex characters all struggle to navigate a path between their duty to their Empire and to themselves. A blurb from George R.R. Martin will help alert his fans to this promising newcomer.