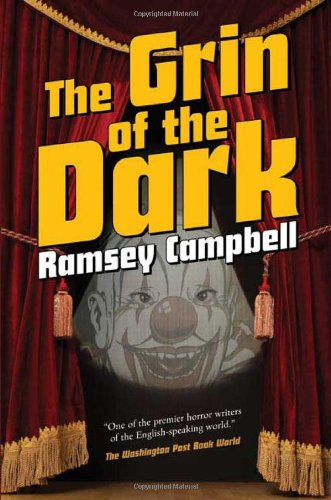 The Grin of the Dark

Horror Grand Master Campbell ( ) draws on the eeriness of clowns, silent comedians and wordless struggles to communicate in this unsettling surrealist fable. Disgraced film critic Simon Lester is writing a book on obscure silent film star Tubby Thackeray, whose outrageous shenanigans caused riots and madness in his audiences. Thanks to Thackeray's blacklisted status and nasty habit of paranormally pestering Simon, research on the book is as difficult and tedious as Simon's personal life, which decays as he struggles to demonstrate his competence while wrestling with forces that are swiftly driving him insane. Campbell's impeccable grasp of interpersonal dynamics makes Simon's confusion all the more cringe-worthy, though the narrative tension stumbles over meticulously reproduced, seemingly endless Internet arguments, and when the characters can't communicate with one another, they have trouble reaching the reader, too. The tale sometimes bows under its own weight, but mostly stands as a fine example of good scares delivered with class.