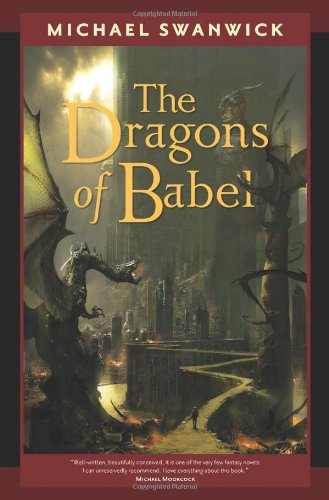 The Dragons of Babel

In this triumphant return to the universe of (1994), Hugo-winner Swanwick introduces Will le Fey, an orphan of uncertain parentage. After defeating an evil mechanical war dragon who has enslaved him and his village, Will finds himself displaced by war, first imprisoned in an internment camp and then transported to the many-miles-high city of Babel. On the way, he falls in with Esme, an immortal child with no memory, and Nat Whilk, a donkey-eared confidence man of superhuman abilities. Fusing high technology seamlessly with magic, Swanwick introduces us to a wide range of marvelous conceits, fascinating digressions and sparkling characters. His language bounces effortlessly back and forth between the high diction of elfland and thieves’ argot to create a heady literary stew. This is modern fantasy at its finest and should hold great appeal for fans of Neil Gaiman’s or China Miéville’s novels.