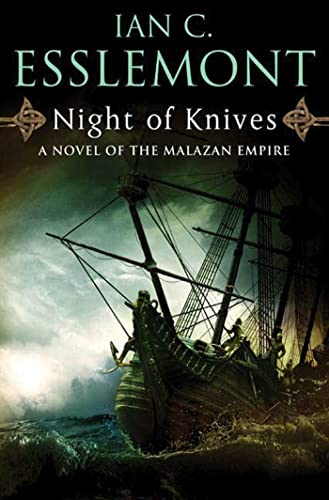 Night of Knives: A Novel of the Malazan Empire

Steven Erickson’s Malazan Book of the Fallen series only hints at the empire’s distant history, which Esslemont, cocreator of the original world, explores in this dark, powerful novel (first published in the U.K. in 2004) and its planned sequels. On a Shadow Moon night on the Isle of Malaz, dead souls rise and demonlike hounds attack any who dare to leave their homes. Knowing that Emperor Kellanved is prophesied to use the Shadow Moon for his own ends, the emperor’s enemies gather on the small island for their own nefarious purposes, starting a plot that spirals into bloody violence. Esslemont nails the feel and flavor of Erickson’s books and brings the historical characters to life with a dexterity that will win over even the most skeptical fans.