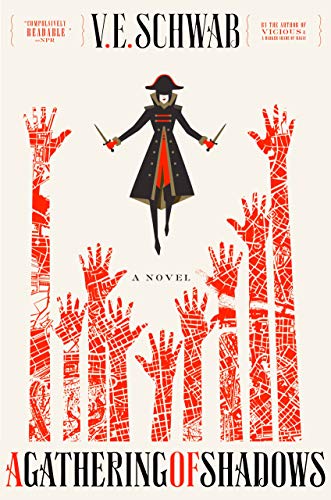 A Gathering of Shadows

Schwab’s fantastic follow-up to 2015’s A Darker Shade of Magic returns to the linked alternate realities of London: Grey London, our own familiar magic-free city in its Regency era; Red London, where people and magic work in concert; White London, where people struggle for control of magic; and the memory of Black London, destroyed by terrible spells. Lila Bard, a cutpurse from Grey London, has found freedom on the high seas with a privateer who’s more than he seems. Kell, a powerful magician with more than a little wanderlust, has given up smuggling between the Londons now that he’s magically bound to his brother, the Red prince Rhy. Red London is about to host the Essen Tasch, or Element Games, pitting the most talented magicians against one another; this would be the perfect place for Lila to show off her burgeoning powers, if she can get in—and she’s eager to see Kell again, in spite of herself. Meanwhile, in White London, a new king rises, and he will do anything, and sacrifice anyone, to make his London great again. Lila, Kell, and Rhy are complex, fully realized creations who challenge conventional ideas of what a hero should be made of, and the supporting characters feel just as real. New touches such as a bustling magical market enliven already-rich worldbuilding. Tensions rise steadily, culminating with the exciting Element Games, and the finale will leave readers breathless. This is how fantasy should be done. Agent: Holly Root, Waxman Leavell Literary. (Feb.)
close
Details