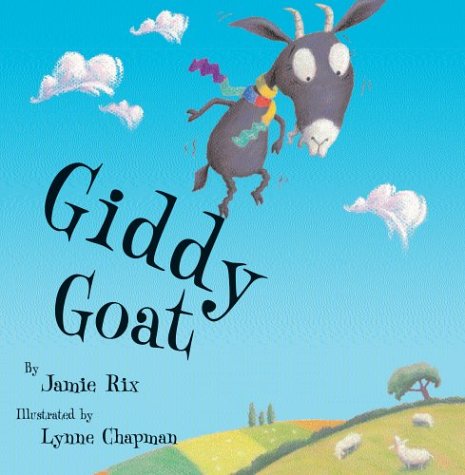 Giddy is an aptly named dysfunctional mountain goat. "Stand him on a ledge and his knees would turn to jelly," writes Rix (). When his family chooses a pointy peak known as "the Needle" for a picnic—an event that Chapman () portrays with gravity-defying gusto—Giddy "was so terrified that he couldn't move a muscle." But when a lamb from the valley becomes stranded in the mountains, Giddy "find[s] the fearless goat inside himself" and bounds to the rescue—an act that not only wins him a new friend, but also unites the mountain and valley herds. The story feels overloaded with purpose—it's about conquering fears and the value of friendship and overcoming prejudice—and Rix's eager, heavily descriptive prose grows pun-heavy (e.g., "The lamb looked sheepish") and monotonous. Despite the animated-cartoon–like charm of Chapman's bright, hyper-alpine setting, depending on one's taste, the wide-eyed, barrel-bodied goats are either cutie pies with hooves (the females have long flirty lashes) or borderline saccharine. Ages 3-8.