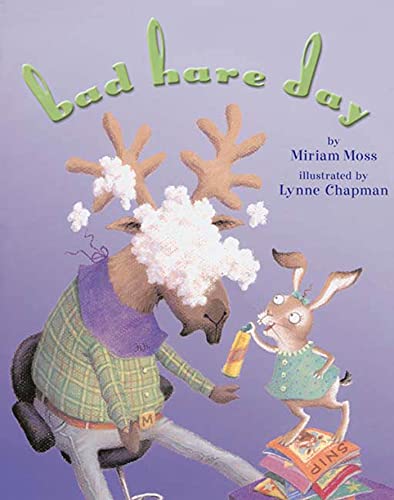 The puns and lively illustrations in this silly hair salon adventure will keep young readers laughing all the way to the rather obvious punchline. Hairdresser Herbert Hare has his hands full when his niece Holly visits his shop determined to help. While her uncle sorts out a shampoo order in the stock room, Holly wreaks havoc with a line of customers, including a giraffe, goat and eagle: "She went up and down, shaving a neck here, snipping a beard there and fixing Bald Eagle's new wig." Herbert calls Holly a "bad bad hare," but when she looks up at him "with sad, big brown eyes," and insists she was only trying to help, he chalks it all up to "a bad hare day" instead. Chapman contributes plenty of visual humor, (adding hair salon magazines like "Hair Today Gone Tomorrow" and "Curl Up & Dye"), often injecting more humor and characterization to the proceedings than the stolid text. Holly's innocent wide eyes and her pigeon-pawed stance help to make her a likable and plucky heroine, and Herbert's carefully curled, thin whiskers give him a hairdresser's élan and pizzazz. The bald eagle frets over his floppy orange wig, and a lion in a British waistcoat and pince nez stares imperiously despite his mangled mane. Thanks to the strong visuals, this harebrained scheme will likely tickle readers. Ages 4-7.