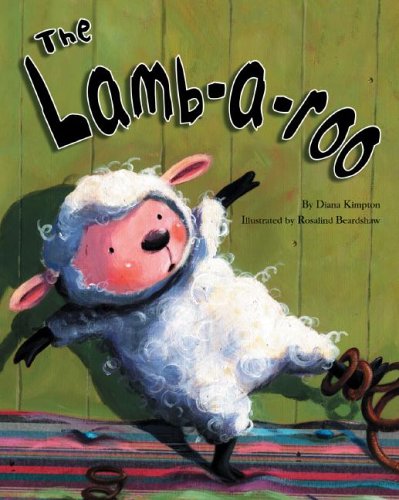 As warm and cuddly as the fluffy lamb on its cover, Kimpton's ( ) adoption book focuses on a child who notices he's different from his relatives. The unlikely duo—a motherless lamb and a childless kangaroo—are content to have found each other until the lamb realizes that he does not have "smooth brown fur" and can't jump like other joeys. Beardshaw's ( ) accomplished use of line conveys the winsome lamb's distress in a series of spot illustrations, as he practices jumping and tries to figure out a solution to his problem. Tiny animals and flowers embellish the landscape but never detract from the central drama of the unfolding emotions of child and mother. They both try to accommodate each other—lamb by attaching bed springs to his feet and the kangaroo by donning a white woolly blanket—but Lamb announces the obvious: "You don't look like my ma-a-a anymore." When Lamb realizes that his huge springs won't allow him to cuddle in his mother's pouch either, they both agree to be just who they are. The affection the two share shines through in both the joyful illustrations and the deceptively simple text. Kangaroo has a puppy-like face, and Lamb's stuffed animal features and roly-roly shape makes him look both innocent and huggable. Fortunately, the story itself is livelier than the didactic endnote. Ages 2-5.