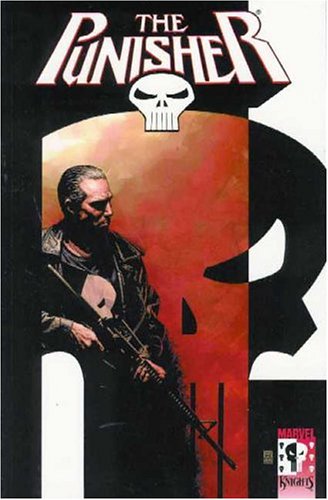 THE PUNISHER VOL. 5: Streets of Laredo

Soon to be starring in his own major motion picture, the Punisher (aka Frank Castle) has an agenda for instilling his own brand of justice on bad guys. Several years ago, Castle's family was murdered by a mobster in retaliation for shutting his crime family down. Castle swore vengeance against not just the mobster and his cronies but against the entire underworld. The Punisher's usual beat is the streets of New York, but this volume takes him to Laredo, Tex. A gun-running group has gone untouched by the local law and is leaving victims across the United States. The Punisher is determined to find the source and destroy it. Using an alias, he infiltrates the town, starts causing trouble and waits for the bad guys to find him. It's not long before he discovers there's much more to this arms-dealing story than meets the eye. The Punisher faces almost impossible odds, but a new ally may be enough to help swing the tide. Readers with a penchant for blood and guts, shoot-'em-up style and plenty of action will appreciate this work. Frank Castle's world doesn't offer many shades of gray; he sees evil and he deals with evil—end of story. However, writer Ennis adds a bit of dimension and soul to this cold, calculating man by revealing details of his life and world through the eyes of the people the Punisher encounters. The art is gritty, in some places gruesome, and gruff, well suited to the themes and situations.