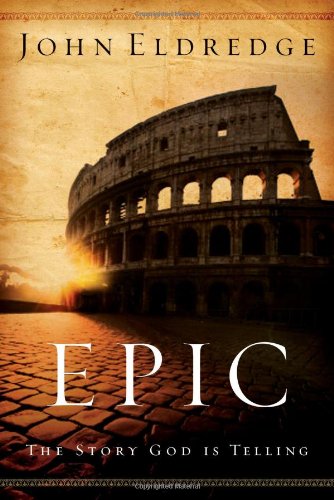 EPIC: The Story God Is Telling and the Role That Is Yours to Play

What if you were a character in the most fantastic tale ever told? Eldredge ( ), a counselor, rearranges and condenses themes found in his book while adding to the growing list of evangelical Christian books that explain human history as a narrative and God as its author. Eldredge tells the story in four parts: Eternal Love (a personal God creating a personal universe); The Entrance of Evil (Satan the villain); The Battle for the Heart (God's calling humans to love him), and The Kingdom Is Restored (God, through Christ, makes all things new). As in past books, Eldredge illuminates scripture using movies ( , and ) and literature, including Yeats, the Lord of the Rings trilogy and the Chronicles of Narnia. The examples work well, with the exception of the character Jack in ; considering that character's seduction of an engaged woman, Eldredge's extensive comparison of his sacrifice to Christ's may rankle some evangelical readers. Eldredge does, however, go out of his way to emphasize hell—a rarity among evangelical writers. This brief primer adds little to what is becoming a shopworn analogy for the Christian message, but it is easily understood and powerful at times, especially when expressing the human longing for a happy ending.