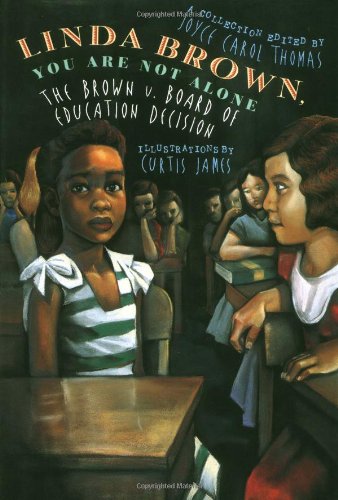 LINDA BROWN, YOU ARE NOT ALONE: The Brown v. Board of Education Decision

To mark the 50th anniversary of the pivotal 1954 Supreme Court ruling, Thomas ( ) gathers candid writing by 10 authors who collectively lay bare the profound, complex consequences of the decision. Their personal reminiscences capture a spectrum of powerfully expressed emotions, chief among them anger at the injustice they experienced or witnessed, regret and even shame at having felt hopeless to change the same or being blind to its prevalence. Jerry Spinelli poignantly recounts his friendship with the African-American neighbor he met in the summer of 1954, as they were both about to enter fifth grade; Eloise Greenfield's poem "Desegregation" captures, in 17 lines, the hopes and fears for the country through the eyes of a child. Quincy Troupe and Ishmael Reed each articulately address the court ruling's paradoxical negative repercussions on all-black cultural landmarks and institutions. Thomas's own poem takes one man's act of prejudice against her family and transforms it into a spiritual experience for all present. Providing a fitting finale is Leona Nicholas Welch's recreation of her graduation from the only Catholic "colored" high school in Mobile, Ala., conducted by a white bishop who addressed the students as "My dear colored people." Welsh concludes, "The bishop had come to remind us of what color we were. In actuality, he had only given us the impetus we needed to go show the world our colors." Making a strong children's book debut, James's closely focused, lifelike pastel illustrations feature striking portraits and memorable images. Ages 10-up.