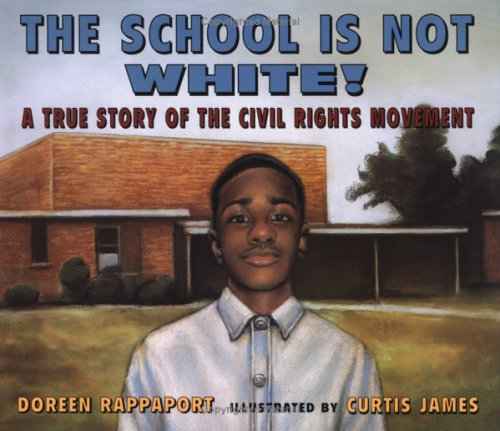 The School Is Not White!: A True Story of the Civil Rights Movement

Rappaport ( ) relays the wrenching yet ultimately uplifting story of one brave black family in rural Mississippi in the 1960s. Sharecroppers on a cotton plantation, Mae Bertha and Matthew Carter believed that "a good education would get their children out of the cotton fields." In 1965, under a new federal law, the Carters enrolled their children in a superior all-white school, a move that cost them their jobs and their home. When the white plantation overseer orders the Carter parents to withdraw their offspring from the school, Mae Bertha plays a recording of President Kennedy's words, which Rappaport rather cryptically paraphrases ("When Americans are sent to war, we do not ask for whites only. American students of any color should be able to attend any school they select without having to be backed up by troops"). On the first day of school, the Carter parents "watched their seven children go off to war in a shiny yellow school bus." At once spare and hard-hitting, the narrative exposes the prejudice the young Carters endured from peers and adults alike. Yet guided by their parents, the siblings persevered. Though the characters at times have curiously indistinct facial features, James's ( ) chalk pastels effectively capture the tale's intense emotion. An epilogue further carries the Carters' message of courage and hope. All ages.