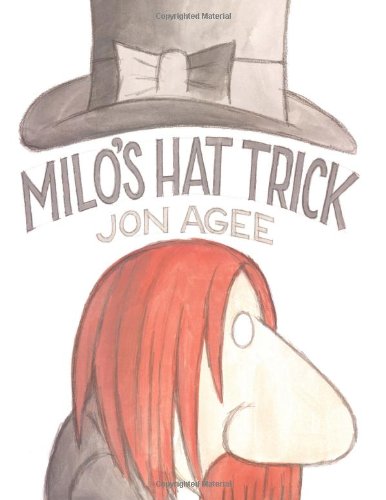 With marvelously economical narration and line drawings, Agee () conjures a formidable tale of a struggling magician. Milo could be Little Orphan Annie's uncle or a caricature of John Lennon. His brick-red mop of hair and thick mustache bracket pupil-less eyes and a voluminous nose, and a too-tight gray suit adds to his hangdog appearance. Onstage, he's no Houdini. He doesn't even have a rabbit for his act, and in trying to catch one (by dangling a carrot from a stick), he attracts a brown bear. This incident provides the absurd turning point of the story, for the immense animal executes a flawless dive into Milo's top hat ("You just pretend your bones are made of rubber. It's a secret I learned from a rabbit," the bear explains). Sitcom developments follow: the bear nonchalantly agrees to perform, Milo loses his furry friend on the train and the top hat walks the New York City streets on two clawed feet. Agee sets off the delectably far-fetched story line with pared-down charcoal-and-watercolor illustrations, and the strong planes and diagonals of his cityscapes recall Ben Katchor's comics. Understated writing complements the surreal images; when the hat finally reaches the theater, "Milo whistled and out popped the bear. 'Boy,' said the bear, 'am I glad to see you!'" In this accomplished book, Agee's plot twists are as surprising as, well, pulling a bear out of a hat. Ages 3-up.