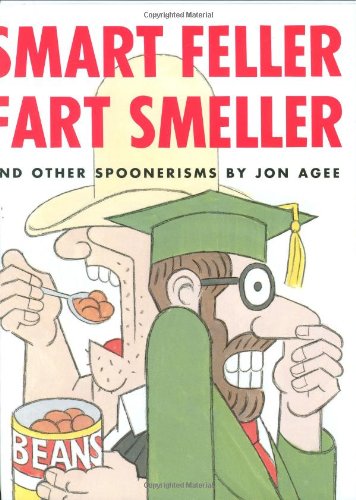 With its unmannerly title in red capital letters, this book hails spoonerisms as a puckish delight. It also dares upstanding adults to put it on display, and invites giggling and cringing alike—a calculated risk, for the title is by far the book's most provocative wordplay. Veteran palindrome collector Agee ( ) highlights the gaffes made famous by Oxford don William Archibald Spooner, whom he introduces as "notorious for flip-flopping the initial sounds of words.... Toasting the Queen's birthday, he blurted out: 'Let's hear it for our queer old dean!' " Agee presents each combination as a riddle with a cartoon clue, solved with the turn of the page. The title joke pictures a bean-eating rodeo guy next to a bookish nerd ("What did the cowboy say to the rocket scientist?/ 'You sure are a fart smeller!' "). With attention to Agee's sculpted duotone illustrations, drawn in rigid charcoaly line with gray wash, readers might guess the punch lines to questions such as "What did the rabbit fanatic say when he smacked his elbow?" ("I hit my bunny phone!") Others will appreciate the pure absurdity of Rapunzel, in her garret, telling a dirt-covered giant, "You need to shake a tower," or the Tour de France competitor standing at the stove to prepare "a well-boiled icicle." It's easy to imagine these precocious quips becoming part of a vocabulary ("That's a lack of pies!" a baker tells Pinocchio), and aficionados of this quiz would do well to read Shel Silverstein's , another boonerific spook. Ages 7-up.