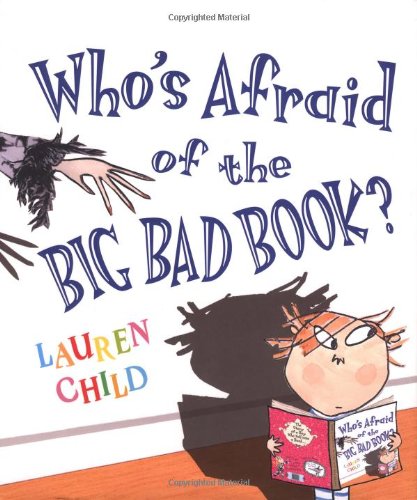 WHO'S AFRAID OF THE BIG BAD BOOK?

Child's (the Clarice Bean books) madcap mélange of recast scenarios features a boy who falls asleep on a page of his fairytale book. He awakens to find himself in a strange bed, being chastised by a girl who shrieks, "How dare you be on this page? I am the star and I say you are not allowed in this story!" and identifies herself as Goldilocks. Scooting downstairs, Herb runs " !" into three bears, one of whom offers him porridge. Again the girl yells: "In case you pea brains have forgotten, this story is called 'Goldilocks and the three bears' not 'the little show-off in pajamas has breakfast.' " Soon, more comic twists emerge: a double foldout reveals a palace ball scene in which the queen sports a mustache (courtesy of Herb's earlier embellishments to his fairytale book; "So you're the doodler who ruined my looks," the queen quips) and both the throne and Prince Charming are missing (Herb has snipped them out with scissors). Though the narrative bogs down a bit with explanations of the boy's negligent treatment of his book, the slapstick comedy runs high. Back in his bedroom, Herb tries to repair the damage, yet he exacts sweet revenge on grouchy Goldilocks, drawing a padlock on the three bears' door to leave her forever stranded outdoors. Set into Child's droll, mixed-media collage art, the snappy text careens playfully across the spreads. A pleasantly warped, kid-pleasing romp. Ages 4-7.