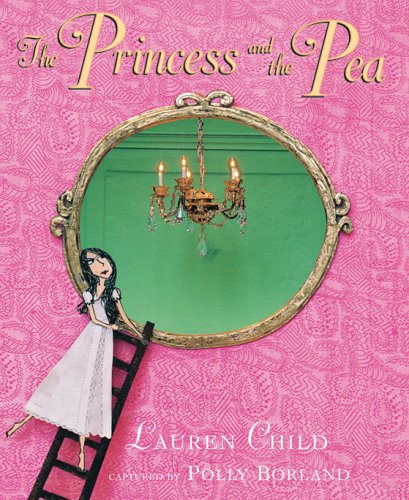 The Princess and the Pea

Shadow-box boudoirs and forest dioramas set the stages for this retelling, designed in flamboyant typefaces and populated by glamorous paper cutouts. Per usual, a king and queen seek a " of blue blood and equal in royalness to" their son. Yet the choosy prince, who's "romantic... but also a little dramatic," sighs that the paper dolls he meets (attired in delicately folded fabric or sparkly paper gowns) lack a " ." While the prince pines, a young lovely "in a treetop house just over the mountain" decides to go for a moonlight stroll; multilayered silhouettes of stark trees and glittery midnight-blue sky suggest danger. Caught in a sudden storm, she arrives at the castle, where she dries off and undergoes the queen's famous pea ritual. Child ( ) emphasizes noble etiquette and this makes for a wee bit of suspense: although the princess aches after sleeping on 12 featherbeds and a pea, she hates to be rude to her hosts, and reluctantly admits to the special discomfort that makes her worthy of the prince. Child's personable voice, signature sloe-eyed characters and a savvy blend of script and italics, enliven the tale. But the main interest lies in the interior and exterior spaces, decorated with tiny glass vases, teeny Persian rugs, little chairs, sculpted shrubberies and electric candles. Photographed by Borland, the fixtures inspire envy in dollhouse enthusiasts and lend a " " to the gussied-up story. Ages 5-up.