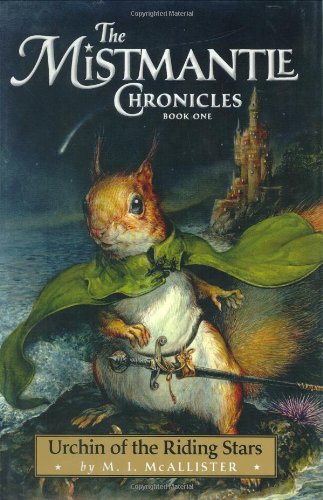 Urchin of the Riding Stars

The first book in the Mistmantle Chronicles introduces a mystical, medieval island and its anthropomorphic woodland denizens. The hedgehog King Brushen rules the island of Mistmantle and his squirrel, otter, mole and hedgehog subjects. The mists that surround the island give it its name, and also hide it from outsiders—except for one pregnant squirrel who finds her way to its shores in time to give birth to a child of prophecy (" ") before she dies. Crispin, a squirrel who serves as one of the king's Captains, discovers the baby on the shore and names him Urchin. The young squirrel is thrilled when Crispin, "[his] hero," later asks Urchin to be his page. But Urchin's joy is short-lived when the king's young son is murdered, and—by an arcane system of drawing lots—Crispin is determined to be the murderer. Urchin, the otter Padra (his new master) and other loyal subjects strive to uncover the conspirators set on overthrowing King Brushen. " 'And, Urchin,' Padra added quietly, 'whatever those sharp squirrel ears pick up, be careful of repeating anything.... I know Crispin was innocent and so do you.... But there is danger in high places on this island.' " McAllister's story may appeal to fans of the Redwall series, though Jacques provides a more intriguing mythology. Still, Urchin and his young friends make friendly, virtuous heroes, and younger readers may well look forward to their future adventures. Ages 8-up.