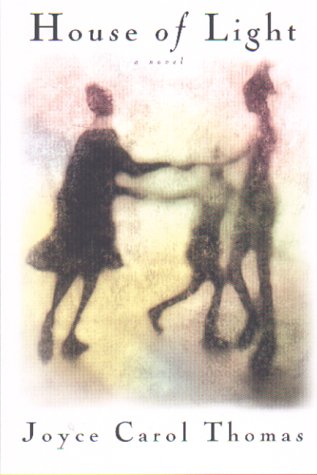 Best known for her poetry and young adult books (including the National Book Award winner ), Thomas here tries her hand at adult fiction, composing a moving novel narrated by a chorus of African-American men and women living in Ponca City, Okla. Abyssinia Jackson-Jefferson, doctor and healer, owns the central voice. In treating her patients, she attempts to deal with their general grief and stress as well as their superficial symptoms. Vennie is a "day girl," mistrusted, ill-used and condescended to by the imperious women whose houses she cleans. Pearline Spencer, estranged from her violent husband, Isaiah, lives in constant fear of his return. Copper-haired Zenobia, a blues singer tired of the demands of performing in big city clubs, comes home and takes up with a white man. Jackson and her almost too-good-to-be-true husband, the lawyer Carl Lee Jefferson, have troubles of their own: they want children but are unable to have them, and keep postponing the decision to adopt. The novel is anecdotal and episodic, with the focus rarely on Abyssinia, yet she is the source of Pearline's courage and Vennie's determination to unionize the "day girls," and even of Isaiah's recognition that he can draw on his own memories of being brutalized to encourage the town's wild young men to act responsibly. This bittersweet story—some of the doctor's patients will never be healed—is lyrically told and becomes ever more engrossing as the various strands are gathered up. The novel is marred only by unsubtle repetition, a rhetorical device Thomas relies on too frequently.