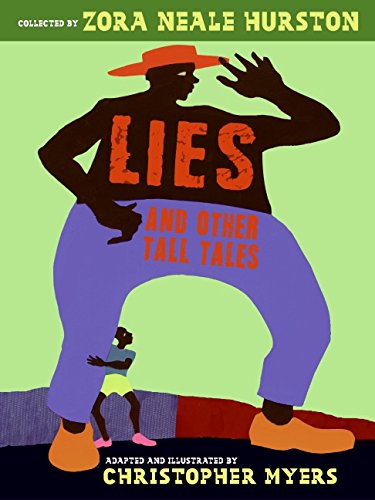 Lies and Other Tall Tales

This collection of interlinking tall tales reads like a lively, bantering conversation. Collected by Zora Neale Hurston as she traveled through the Gulf States "back in the day," and retold and imaginatively illustrated by Myers takes on powerful resonance in light of recent events. The colorful, hyperbolic tone that carries through the collection begins with Myers's introduction: "Zora Neale Hurston, who was studying anthropology/ With a bunch of educational-type liars at Columbia University,/ Came down south to talk to the professional liars she growed up with." Text appears in boldly colored, grainy typeset with some words highlighted for proper emphasis, opposite full-bleed or framed collage illustrations quilted from paper and fabric scraps. The opening spread depicts a man's head emerging from wavy blue paper swirls set against three earth-toned bands of cloth: "Once I seen a man , they threw him in Dog River and they could for six months." The next page carries through the earth tones and horizontal lines, but adds touches of green and dancing monkeys: "You think he was ugly? I seen a man he can go behind a jimson weed and ." The tales segue seamlessly, some building upon the preceding tale, others structured as a call-and-response, but all imbued with details and phrases from the South. Myers's arrangement of text and his bold, compelling artwork exuberantly portray the tales' human subjects in outlandish predicaments. The humor gleaned from these "professional liars" carries through the decades, offering a window into traditional African-American storytelling. Ages 6-up.