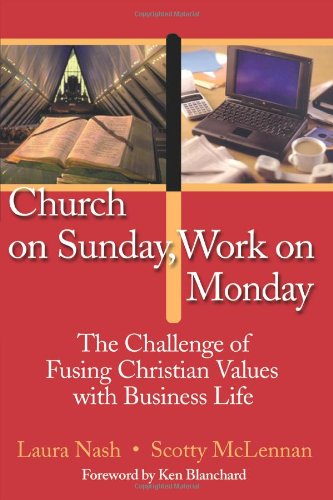 CHURCH ON SUNDAY, WORK ON MONDAY: The Challenge of Fusing Christian Values with Business Life

According to McLennan (author of and inspiration for Doonesbury's Rev. Scott Sloan) and Nash, the church manages to support and nurture its people through birth, marriage and death; when it comes to helping Christians make sense of the day-to-day grind of the business world, however, churches are too often silent. It is vital for the future of the church, and for the well-being of Christian business-folk, that churches and parishioners find a way to talk meaningfully about the connections between faith and work. Clergy in particular will value this book, which is filled with tips to help them minister more effectively to the businesspeople in their midst. For example, the authors suggest that seminaries should offer more "exposure to the character of the businessperson," and that clergy should attend the occasional business seminar. This would have been a stronger book if the authors had restrained themselves from stuffing it with familiar but uninspired self-help suggestions for "reflection" and "action" at the end of each chapter, or cutesy mnemonics like "the four P's." It is hardly the final word on the subject; its riveting descriptions of the glaring gulch between church and business are more compelling than its attempts at bridging that gulch, making this more "wakeup call" than solution. Still, McLennan and Nash have made a valuable contribution to the growing conversation about church-life integration, and clergy especially shouldn't miss this book.